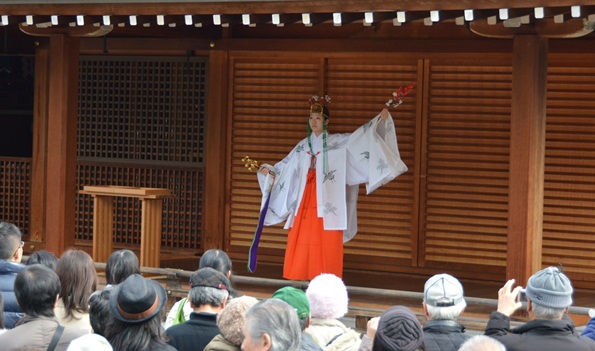 Worshipers to Jonangu request the shrine maidens to perform a kagura, or ritual dance, to appease the deities and ask for divine protection in the fervent hope that the deities hear their supplications. So every day the shrine precinct is filled with the ringing of the kagura bells. Visitors can also watch the shrine maiden’s kagura at the Kaguraden Hall’s center stage on the following days for free. 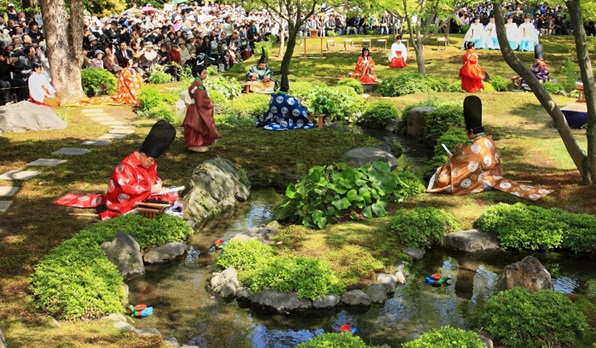 This elegant poetry-composition event, which was popular in the imperial court from the Nara Period (710–794) through the Heian Period (794–1185), is held twice annually in Jonangu’s garden. Kyokusui-no-utage was essentially an aristocratic garden party. Seven poets (five male, two female) dressed in Heian court attire enter the garden and are shown the day’s theme on a piece of paper. They then take their positions by the meandering stream. A young woman performs the Shirabyoshi-no-mai dance, and two boys fill numerous vermilion-lacquered sake cups with sacred sake and float them one at a time down the stream on mandarin duck-shaped vessels. With the koto playing in the background, the poets improvise tanka poems (of 31 syllables) on paper strips. Once they have written their tanka, each poet takes a vessel sip on the sake. When all seven poets have drunk the sake, the boys collect the completed tanka. The seven poems are each set to a traditional tune and dedicated to the deities. Experience the elegance of the imperial court a millennium ago in this hour-long event. 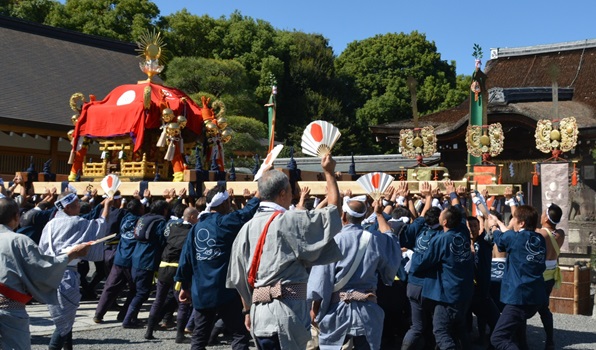 This festival, which survives from the Heian Period, once entertained retired emperors and aristocrats. Three splendid mikoshi portable shrines, weighing about 1.5 tons, are enthusiastically carried by around 100 men each to the cries of “hoitto, hoitto.” The first mikoshi departs the shrine at midday, with the others following at regular intervals. The deities riding in the mikoshi tour the parish under their protection and bless the people. The return of the mikoshi to the shrine in the evening is a grand sight, with lanterns and flaming torches lighting the way. 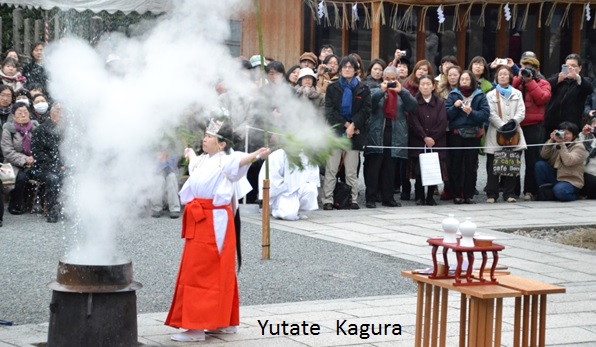