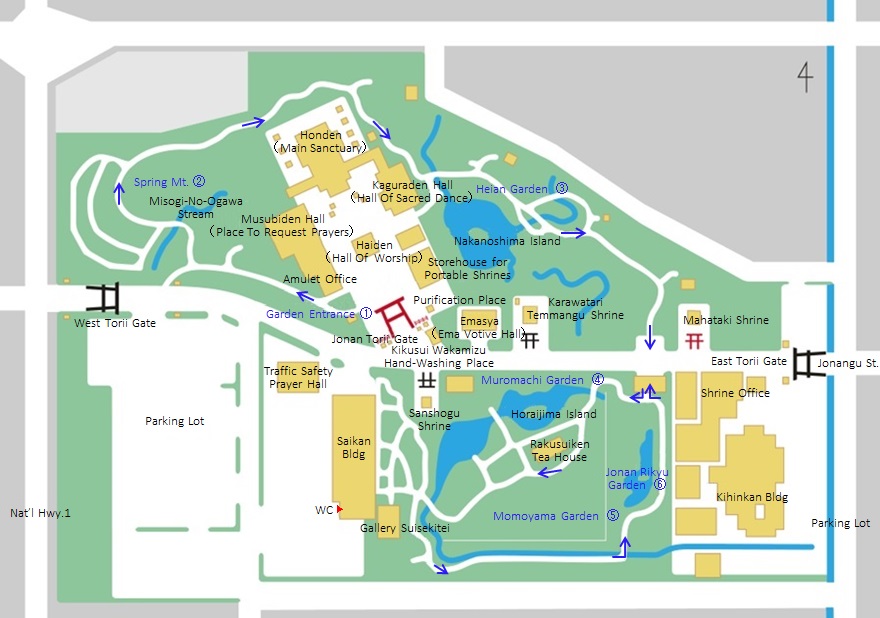 The shrine precinct is 30,000 sq. meters in area. Its shrine buildings and the surrounded gardens, beautiful throughout the year, are immaculately kept and exude a fresh atmosphere. Jonangu enshrines the guardian deity of construction, so the shrine carpenters paid extra careful attention when constructing the traditional wooden structures, true testament to their skill and precision.
Kikusui-Wakamizu 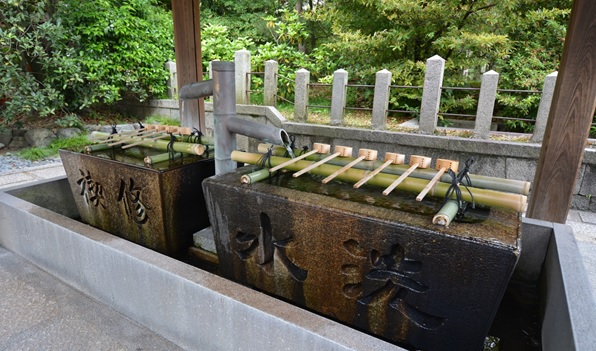 The water running in the purification basin has been well known for its healing powers since the Edo Period (1603–1868). A steady stream of people visits the shrine every day to draw sacred water from one of Kyoto’s famous springs. Washing your hands before you enter the shrine symbolizes purifying your body; and rinsing your mouth, cleansing your heart. 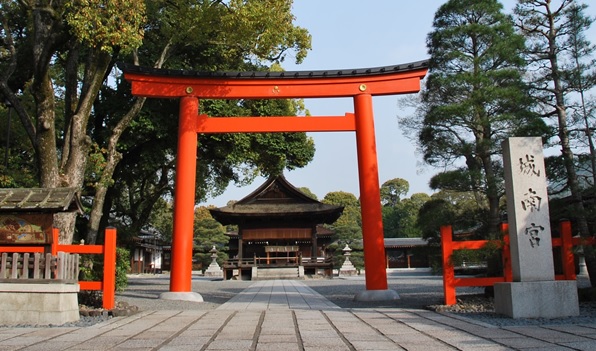 Enter the precinct through the vermilion torii gate, which indicates the entrance to a sacred place. Jonangu’s crest adorns the center of the torii’s top crossbar. Called the Sanko-no-Mon (or Three light crest), it represents the sun, moon and stars; night and day; and the divine grace of the deities of Jonangu shines throughout the universe. 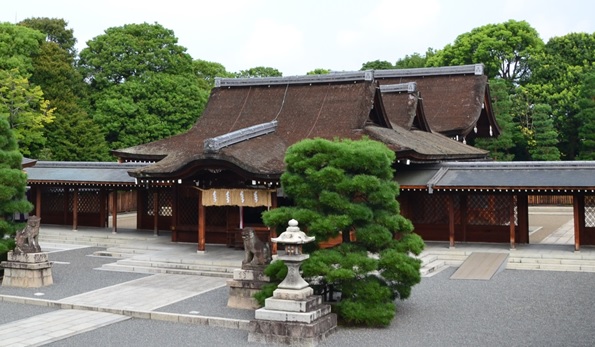 The Main Sanctuary was rebuilt solely with bare Japanese cypress in the Heian style of architecture. It is one of the largest wooden shrine structures in Kyoto. The two Shinto statues visible inside at the back, holding bows and arrows, represent the military officers who guard the deities. These, too, were carved in the Heian style. To pray at the shrines in the traditional way, bow twice, clap twice, and bow once. 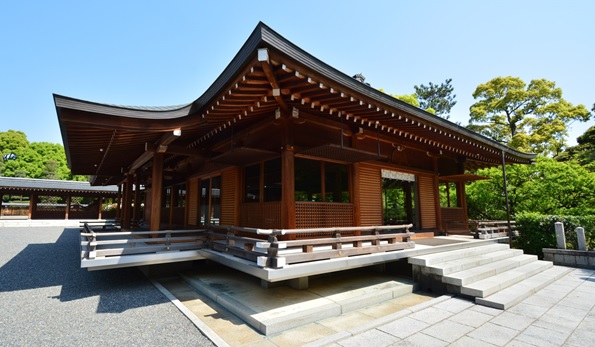 When facing the Main Sanctuary, to the right stands the Kaguraden Hall. The shrine carpenters’ skill is evident in this graceful structure, modeled on Heian aristocratic residences. Shrine maidens occasionally perform their kagura ritual dances in dedication to the deities on the center stage. (Refer to Shrine Maiden Kagura for dates.)

Ema Votive Hall
Ema literally means a picture of a horse. Horses were thought to be the mode of transport of the deities, so people in ancient times dedicated horses – living, miniatures, or pictures – when prayed to the deities. In time, the word ema came to refer to the votive plaques bearing pictures of horses or other illustrations. Large shrines erected special buildings for worshipers to hang their ema on which they wrote their wishes. Jonangu’s Ema Votive Hall has ema dating back to the Edo Period (1603–1868) bearing illustrations of the Jonan-sai festival. Visitors to shrines continue the custom of writing their wishes and prayers on the reverse of ema to this day.
Sanko-no-Mon

Jonangu’s crest – called Sanko-no-Mon, or Three light crest – represents the sun, moon, and stars. It is said that the crest was originally used as the insignia on the imperial ship owned by the Empress Consort Jingu, one of the deities enshrined at Jonangu. It represents the divine grace of the deities enshrined at Jonangu reaching everyone in all corners of the universe, day and night. Sanko-no-Mon is rare in that it is only used at three other shrines of the some 80,000 shrines throughout Japan,