The Rakusuien garden, which completely surrounds the shrine buildings, is composed of five distinct gardens, depicting the evolution of Japanese gardens. A stroll through the garden is akin to walking through time. The garden has 150 plum trees, 300 camellia bushes and close to 100 maple trees. It also grows all the plants (over 80 kinds) that appeared in The Tale of Genji, the epic novel written in the Heian Period. Discover the Japanese love of nature; flora lies at the heart of the elegant Heian culture.
The entrance (1) is beside the Amulet Office, just inside the vermiliontorii. 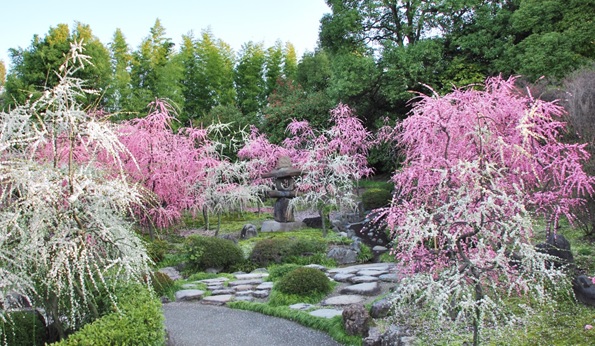 This manmade mountain is a remnant of Jonan Rikyu, the retired Emperor Shirakawa’s villa. In spring, it is abloom with more than 150 weeping plums and numerous varieties of camellias. From June 25 through 30, visitors to Jonangu can participate in the Hitogata Nagashi purification ritual. Worshipers cleanse themselves of the sins and impurities they accumulated over the previous six months and pray for good health by floating paper human figures down the purification stream. 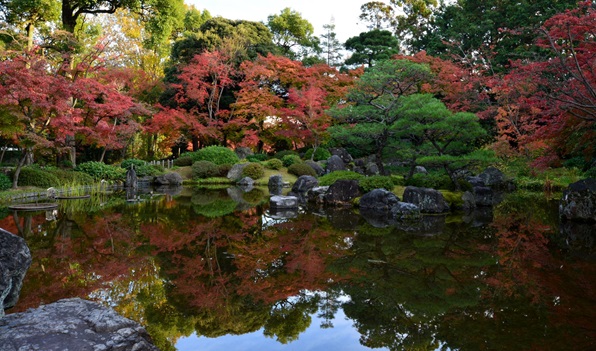 This garden is modeled on the gardens found in the residences of the Heian aristocracy. It comprises a pond, an island, two streams, and a terraced waterfall. The nobles would enjoy their gardens in all seasons with pleasure boat rides on the pond, cherry-blossom viewing parties, and poetry-composition gatherings. Reminiscent of these glorious times, the Kyokusui-no-Utage poetry-composition gathering is held along the back stream, twice annually. The fresh verdure of spring imbues visitors with the vitality of life, and the turning colors in fall reflect brilliantly on the pond’s surface. 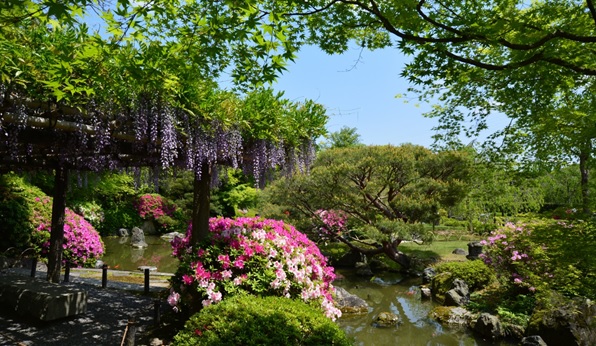 Tea ceremony, ikebana, Noh drama, and other traditions and arts flourished during the Muromachi period (1336–1573). This garden style popular at the time was majestic with stone configurations throughout. The waterfall, named Medaki (or Female fall), in the foreground trickles softly. In contrast, waterfall at the back of the pond, called Odaki (or Male fall), plummets vigorously. In the pond’s center stands Horaijima – the island of the immortal hermit – on which grow pines, symbols of longevity. The triad cluster of stones on the opposite bank represents Buddha flanked by two Bosatsu in the ideal Buddhist world. The dock beside Odaki is designed to allow people to board boats and journey the ideal world of Buddha. The pond, which is inhabited by koi, is especially stunning when the wisteria bloom in late April, when the azaleas flower in May, and when the colors turn in autumn. 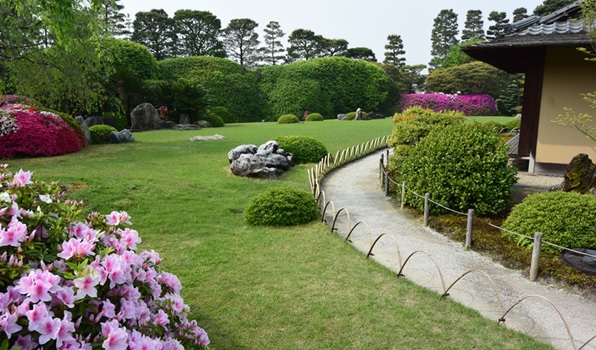 Momoyama Garden, which lies to the south of the tea house, is a karesansui garden that depicts the sea without actually using water. It is an open garden reflecting the magnificent traits of the Momoyama Period (1573–1603). During this period, Japan came into contact with European culture. The warrior class aspired to unify the entire nation, and the military commanders built grand castles. The manicured trees at the back represent Japan’s mountains; the expansive lawn, the Pacific Ocean; and the stones dotting it, the islands off Japan’s coast. The pine pruned in the shape of a ship in the back right is imagined to be a ship arriving from Europe. When appreciating this scene, it is hard not to be moved by the spirit of the voyagers as they finally reach the golden nation of Zipangu – as Japan was known at the time – at the end of their long voyage. The garden is especially beautiful in April when the cherry blossoms bloom, followed by the azaleas. 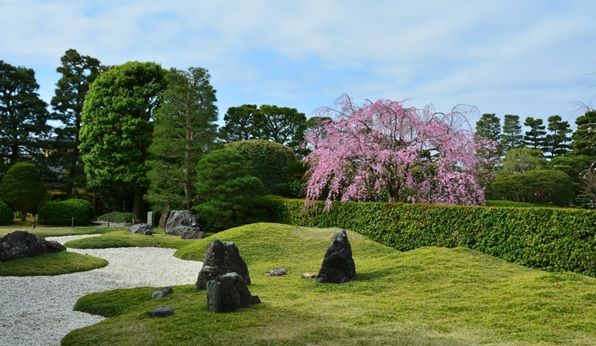 This karesansui garden depicts the area around Jonangu at its most splendid during the Heian Period. The flat stones of the garden path represent the Kamo River, which flows through Kyoto; the sea of white pebbles, the imperial villa’s pond; the grass, land; and the rocks, the residence and surrounding buildings. Let your imagination run wild, and picture in your mind a time when the aristocracy gathered at the villa and the samurai vied to better each other in prowess. 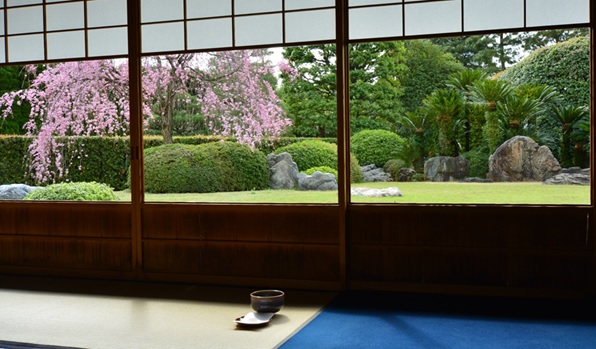 The Rakusuiken tea house stands between the Muromachi and Momoyama gardens. Enjoy matcha green tea and traditional sweets, served by shrine maidens, while admiring the beautiful garden outside. Make special note of the confections that reflect the season. (Additional fee: 300 yen, payable at the tea house )